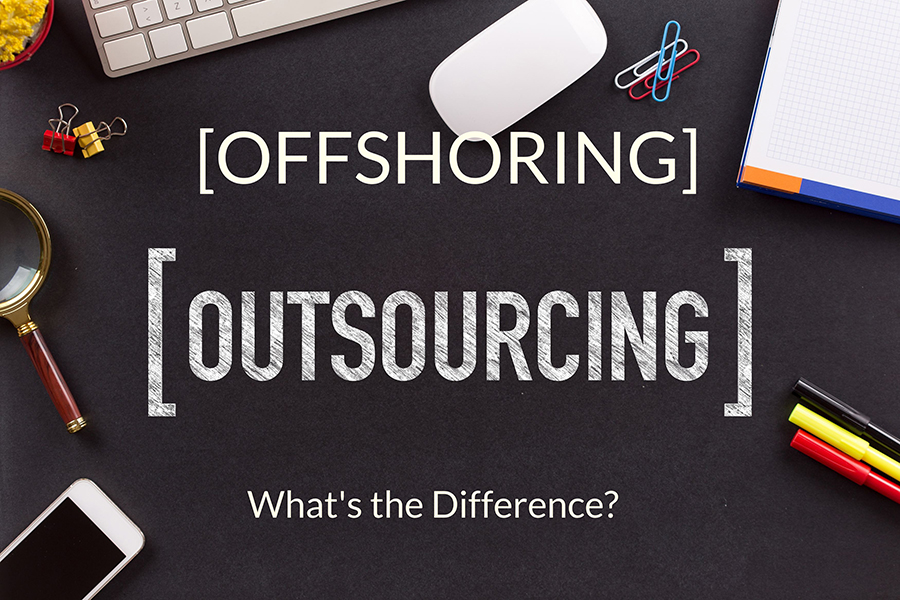 Outsourcing refers to an organization contracting work out to a 3rd party, while offshoring refers to getting work done in a different country, usually to leverage cost advantages. It’s possible to outsource work but not offshore it; for example, hiring an outside law firm to review contracts instead of maintaining an in-house staff of lawyers. It is also possible to offshore work but not outsource it; for example, a Dell customer service center in India to serve American clients. Offshore outsourcing is the practice of hiring a vendor to do the work offshore, usually to lower costs and take advantage of the vendor’s expertise, economies of scale, and large and scalable labor pool.

Outsourcing refers to the contracting out of an entire business function, a project, or certain activities to an external provider. The term entered the business lexicon in the 1980s. In the second half of the 20th century, as companies tended to grow larger and skills were required to be more and more specialized, companies found that external providers were often able to get work done faster and more efficiently owing to skills they possessed. This led to more hiring of external providers to manage business functions and projects where specialized skills were required.

Towards the end of the twentieth century, with improvements in shipping technology and telecommunications infrastructure, it became increasingly efficient to get work done in other geographical locations, especially in developing countries where wages are lower. This practice came to be known as offshoring. Not all offshore work was outsourced, however. Captive offshore refers to multinational corporations (MNCs) establishing subsidiaries in several countries and getting different types of work done in different countries. Factors that MNCs consider when offshoring include costs of factors of production (wages, raw material, transportation costs, utilities such as electricity), taxes (many countries offer subsidies to entice MNCs to set up shop) and skills available among the work force.

There are several reasons for companies to both offshore and outsource.

Why do companies outsource? There are several reasons why a company might outsource. While this can be a politically sensitive topic, management experts generally agree that outsourcing – when done right – increases competitive advantage with a natural division of labor that evolves in any society. Reasons for outsourcing include:

Offshoring provides many of the same benefits as outsourcing, including:

Note that you do not need to outsource in order to offshore. Captive offshore units are set up to leverage the benefits of offshoring without having to outsource to vendors. This is usually done when companies believe that their offshore centers for production/service will provide them with an edge over the competition.

Offshoring and outsourcing have both been subject to a lot of criticism, especially from a political standpoint. Politicians and laid-off workers often blame offshoring for “stealing jobs”. Most economists, however, agree that offshoring lowers costs for companies and passes on benefits to consumers and shareholders.

There are, however, risks associated with offshoring. These include project failure due to poor communication; civil or political unrest impacting production or service delivery; arbitrary changes in economic policy of governments may force unncessary restrictions on MNCs; and poor infrastructure in the developing country may affect quality or timeliness.

While the benefits of outsourcing and offshoring largely overlap, they do not face the same disadvantages. Outsourcing, when done within the country, does not face the same political criticism of loss of jobs. Risks associated with outsourcing can largely be attributed to the vendor’s lack of familiarity with the client’s business. Another risk is a lack of alignment of long-term business objectives of the client and the vendor.

When outsourcing is combined with offshoring, not only is work contracted out to a third party, but it is also agreed that the work will be performed in a different country. The reasons are usually to take advantage of the benefits of outsourcing and offshoring both.

In the past decade and a half of increasing globalization, offshoring has been the fastest growing segment of the outsourcing market. This is especially true in the case of manufacturing – with China being a leader – and information technology services, with India leading that space. Business process outsourcing is another area of offshoring that has grown tremendously.

Just as offshore outsourcing combines the benefits, it is also susceptible to the risks of both business practices. Critics claim that these risks are magnified because of the complexity being multiplied. For example, while it can be challenging to work with an external organization for projects that require knowledge of your business operations, these challenges could increase manifold when members of the external organization are located in a different country. Risks include poor communication, incorrect setting of expectations and disconnected control structures.

There are several best practices that have evolved over the past two decades to mitigate risks and improve outcomes of projects that are offshored and outsourced. Many of these practices are related to business processes. Process maturity models like CMMi and Six-sigma measure not only the quality of processes that outsourcing vendors employ, but also how well companies monitor their processes, measure key metrics and how they continually improve these processes.

On the whole, both outsourcing and offshoring are on the rise. The worldwide economic recession has forced companies to explore all options to increase efficiencies and cut costs. Companies are getting increasingly comfortable outsourcing (as well as offshoring) larger parts of their businesses as they realize they are not core.

Political backlash has also been growing with unemployment rising in the developed world.