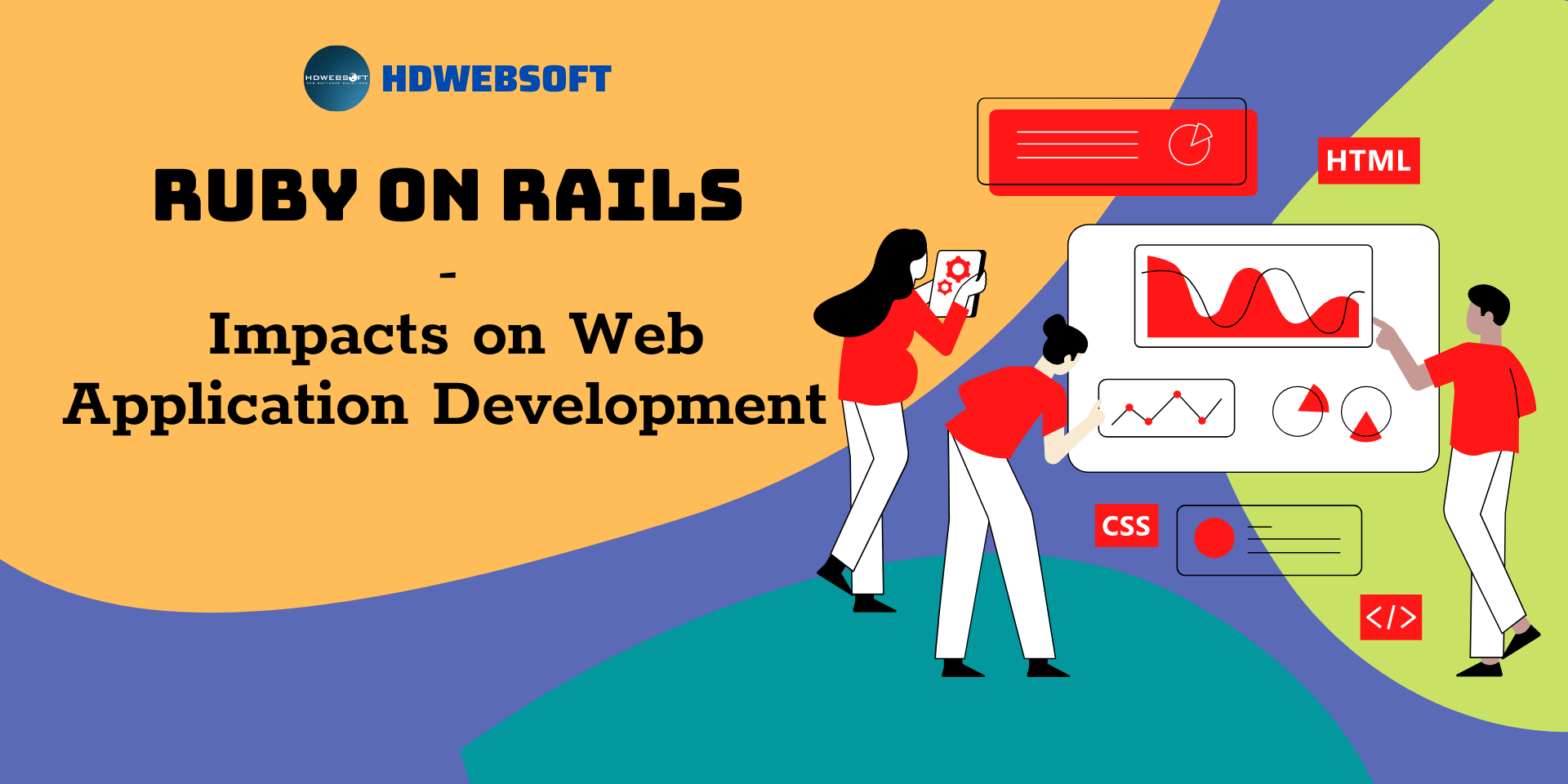 Among various useful web development tools, Ruby on Rails (RoR) is one of the most favored server-side web application frameworks ranked by veteran developers. Specifically, Ruby on Rails has a market share of 7.04% in the web-framework market among 17 other frameworks, according to Statista. To learn why it is so popular, let’s have a closer look at RoR’s advantages and impacts on the other web-framework development.

As usual, we should learn about its background before diving into details.

Ruby on Rails (RoR), released in 2004, is a dynamic open-source framework written in Ruby programming language for developing apps that operate like a true web page. Additionally, as a model-view-controller (MVC) architecture, Ruby on Rails allows building logic construction and high-performance via HTML, JavaScript, CSS files, and a set of default structures for a database, a web service, or web pages.

The emergence of Ruby on Rails has had a significant impact on web application development for over 17 years due to its notable features such as seamless database, migrations, view scaffolding, etc, which empowers rapid development.

As of March 2021, Ruby on Rails is utilized by 4.5% of websites employed as a server-side programming language and is widely used in the US. It is the best choice for retail web app development accounting for over 7% – the largest segment of all the sections.

Various well-known sites have RoR bases such as Airbnb, Crunchbase, and Bloomberg.

RoR-based webs are well-arranged and avoid redundant information in the system itself. Let’s take a look at some of the features of Ruby on Rails that continue to make it a popular web framework after all these years.

With a Model-View-Controller (MVC) framework, this architecture comprises three distinctive interconnected layers that represent each function. Starting with the model, it allows building logic and centralized data structure, following data manipulation rules. Next is the View, it is where the interaction between application and users begins. Specifically, the communication between users and data will proceed via the embedded Ruby code on HTML files, PDF, XML, RSS, and other formats. The controller coordinates the activities. To be exact, receiving requests directly from the browser processes them with models, then effectively illustrates the outcome to users with views.

The MVC architecture helps organize the data effectively with primary but logic layer division. Furthermore, it enhances the capacities of maintenance, testing, and decoupling.

With the configuration paradigm, Ruby on Rails saves time and effort in the development stage. Precisely, the configuration files contain all-ready details, allowing developers to write less code than other frameworks.

This is one of the most well-known features of Ruby on Rails. With this principle, the data storage is organized logically to minimize errors and eliminate redundant information in the software development process.

Simplicity is one of the most notable Ruby on Rails advantages. It offers readable and straightforward syntax, which is English-like for “native” feelings in the development process. Precisely, RoR reduces developers’ burden of producing code or help text since it seems almost self-documenting. Additionally, it opens for cross-checking and learning details in a project.

Besides, Ruby on Rails is also a friendly web framework for even a non-technical person. Using Ruby, the most accessible programming language, RoR eliminates most of the difficulties in development due to its code in English declarations. Furthermore, Rails offers a huge source of valuable libraries and plugins as well as an excellent community for learning and devotedness. To be exact, it comprises integrated solutions with which web developers commonly deal. RoR also saves developers time from searching for a proper structure of a web application due to its specific set standards. All web apps built with RoR are tremendously productive and maintainable.

Last but not least, RoR has been becoming a robust and fascinating framework that attracts all developers.

In some cases, a line of Ruby code is equivalent to six lines of Java code; as a result, less code development effort is required. RoR also offers robust infrastructure allowing developers to build Ruby on Rails web applications from scratch. Besides, due to Ruby’s object orientation, lean code base, modular design, abundant open-source code generated by the Rails community, and a large selection of available plugin options for feature development, web app development with Ruby on Rails is enabled for rapid development.

Furthermore, clients can also assess the product’s practicality and correct any flaws in its scope and direction early on, reducing risks.

Ruby on Rails features are valuable for long-term projects and start-ups thanks to its capabilities of modifying and maintaining existing codes. To be exact, Rails conventions allow new members to join, grasp, and update the existing project in the fastest way. Notably, Ruby on Rails is the best choice for start-ups since it eases the take-over process.

Cost efficiency is another notable advantage of Ruby on Rails. In fact, no matter how your budget is, Ruby on Rails always makes your wish come true. Since it is free and open to every individual, it offers a good price for its outstanding features. Specifically, the Ruby on Rails project allows a multi-nation team, which means developers are not required to be at some places during the development time. It also helps enhance web apps’ productivity, performance, and business logic.

Various notable web names are built with Ruby on Rails, as introduced above. Let’s have a look at them to draw out the types of business or projects to which RoR is best suited.

RoR focuses on posting speed and navigating users. It also ensures quick users’ access without worrying about the volume of documents, audio, or image files.

Despite RoR restrictions on large-scale web apps with huge in-time access, it has various valuable plugins to resolve problems regarding social networks and membership web pages.

RoR provides a great database-back framework that helps you work efficiently in responding to heavy frameworks like J2EE. Precisely, it supports and saves money for building websites with database models. It is perfect for small and medium size projects. Furthermore, in case of encountering limits, experienced RoR developers will solve the problem easily.