How does Django benefit your web applications? 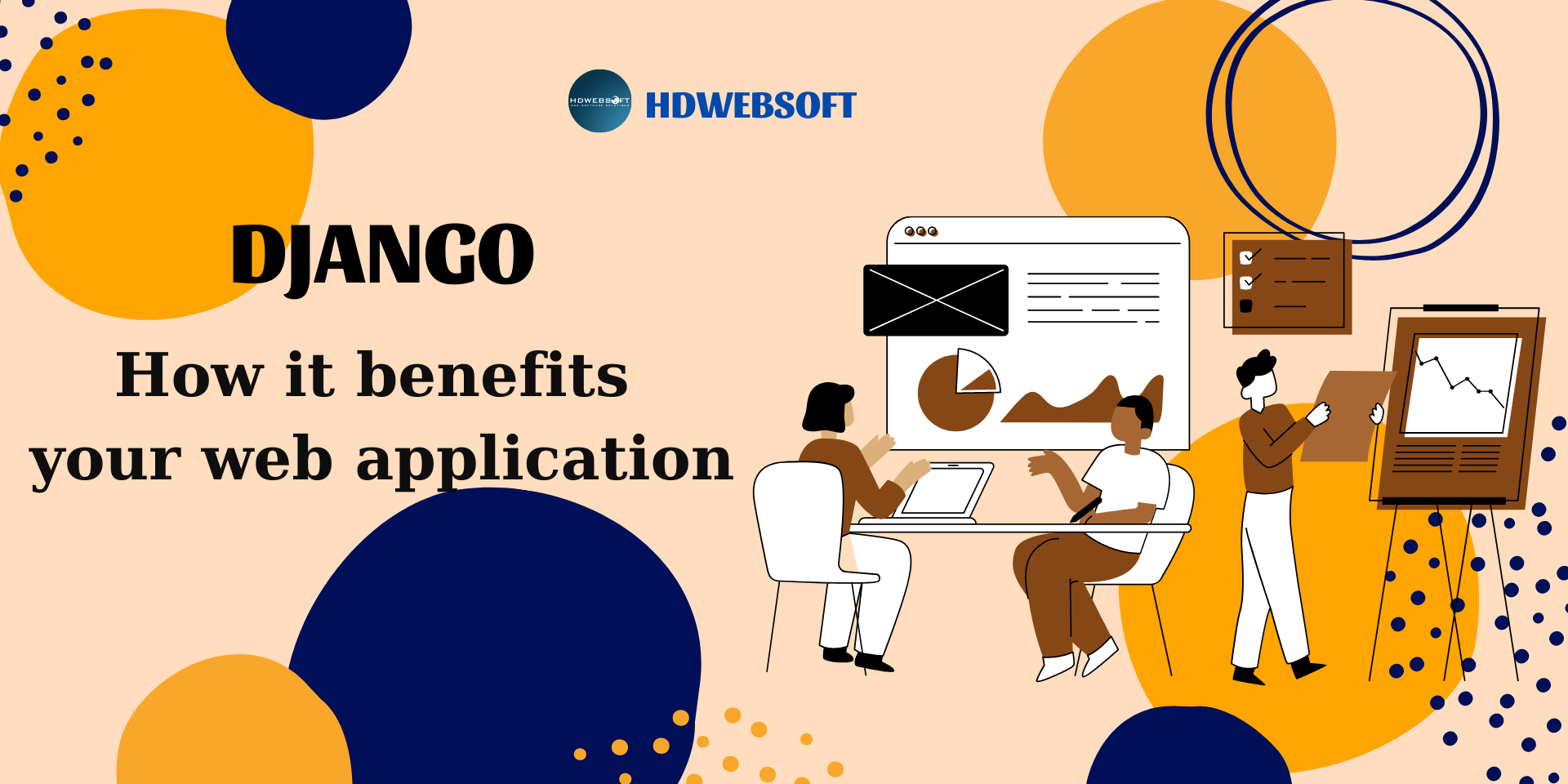 How does Django benefit your web applications?

It is challenging to opt for the best web development framework among the numerous notable ones on the market. In fact, developers will prioritize frameworks that meet three criteria such as written language, its available features, and its reputation. Django easily dominates all of the parameters since it is the best Web Application Development framework. Django, in particular, is well-suited for many businesses and corporations thanks to the benefits that Django development framework offers.

A Brief of Django

Django, initially released in 2005, is a free, open-source, and high-level python-based web framework. As a robust back-end development tool, it empowers rapid creation of secure and stable websites. Django is utilized for simple yet brilliant web application development. Precisely, it eases the complexity in building web applications with the driven-databases. It also prioritizes reusable and pluggable components. In a word, Django reduces coding and duplicate parts. Furthermore, it is more straightforward to work with compared to other technical frameworks.

Django is the most widely used Python-based web development framework. According to the 2020 JetBrains Developer’s Survey, it ranked 1st position with 19,000 web developers’ votes, accounting for 49%.

Models correspond to single and distinctive database tables. In fact, each model is a straightforward Python class independent of each other, which communicates possibly only via an application programming interface (API). Besides, it contains business logic, custom techniques, properties, and other data manipulation-related items. Precisely, objects (data sets) in the original database can be created, read, updated, and deleted using models.

Next is the View components. View executes tasks as a tree structure. To be precise, information is gathered from models and sent to each template for explicit details to be shown or handled in advance.

A template is the last element in this architecture pattern. Django’s templates are incredible with their markup language along with many tools. To be exact, they are HTML-coded files, which are utilized to render data. Truth be told, documents are either static or dynamic substance to pass on information since it has no business logic.

What is Django used for?

Django is an excellent web application development tool trusted by thousands of websites worldwide. Developed by Holovaty and Willison, it was named after a talented guitarist – Django Reinhardt. In fact, it has distinguished itself from the crowd thanks to its multitasking ability. Besides, Django is also a place encouraging developers’ innovation and artistry. In a word, it is where software developers’ creativity shines.

Following are what Django is also used and great for.

Django, the most widely used Python-based framework, is notable for its emphasis on features.

Benefits of utilizing Django for your web application development

Many titanic corporations utilize Django as one of their preferable programming languages. It is an all-in-one web framework, which suits any sort of web development project. Precisely, it benefits various project types such as start-ups, scale-ups, and from a simple MVP to huge business software.

Besides the well-known features mentioned above, Django development benefits have contributed to its reputation.

The Django web framework adheres to the ‘Don’t Repeat Yourself’ and ‘Keep It Short and Simple’ philosophies. With Django, a complex web app can be done within hours. To be exact, it helps save coding time and accelerates the publication process thanks to its ease in the coding phase, available templates, automatic data relations, dashboard, and other conventions.

In fact, as a Python-based web framework development, Django inherits straightforwardness and reusability of components allowing it effortlessly conveys forward.

Django framework comes with everything pre-installed, which is known as batteries-included. To be exact, it comprises all required components for building a complex web application from scratch such as productive user interfaces, admin panel, testing programs, and code altering instruments.

In addition, Django also contains a strong library called REST – Representational State Transfer framework, which is a well-known toolkit for constructing web APIs that allows Django developers to create a full-fledged API in just 2-3 lines of code. Django’s data is not limited by any protocol, and it can return a variety of data formats as well as handle a range of call types.

In a nutshell, Django’s template engine enables your business to leverage existing technology while customizing it to fit your needs.

The Django ORM facilitates the issue of maintenance and updates big relational databases and models. Django-based web applications are ideal for developing data-driven content management systems. Additionally, it comes outfitted with data-plotting and examining instruments, which breaks down client data and your advertising strategy.

On the off chance that your association is hesitant to move to Django’s in-built ORM, you can utilize MySQL and PostgreSQL, which are major relational databases supported by Django.

One of the most powerful admin panel development technologies for frameworks is Django’s automated admin interface. It is a handy tool for content management on your website and serves as an internal management tool for your company.

It peruses metadata from your models to make an incredible and creation prepared interface for administrators. Furthermore, you can easily alter the UI to meet your needs.

Django, as one of the top security systems on the market, is constantly kept up to an elevated quality, following the most recent trends in site development and security. Django is routinely updated with security fixes. It isn’t surprising that Django has an LTS (Long-term Support) variant. Regardless of the system’s version, its security is just as strong as the new one.

For web developers, automated testing is an immensely useful debugging and testing tool. Django comes with a suite of tools to help automate your testing. Precisely, the test client is a Python class that simulates a web browser and allows you to test your views and interact with your Django application. It also permits you to test the result of your non-concurrent sees utilizing the test customer or even compose your own completely offbeat tests for your Django project.

In this way, Django is the best web system for the test-driven turn of events.

Django is trusted and used as the core of thousands of business titans with high traffic, such as Google, Youtube, Spotify, and Instagram. Django development benefits aid developers in composing custom web application creation in Python.

HDWEBSOFT takes pride in being the most reliable Python Development and Django Web Application Development Company in Vietnam. We ensure a robust, high-quality, and function-rich custom web application. Whenever you need help to develop Django-based solutions, please do not hesitate to contact us for the best result.